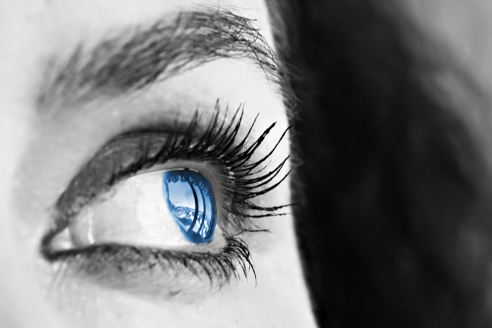 Convicting grace makes sin repulsive to the sinner, but it makes Christ attractive to him. As God convinces a person of the depth and consequences of their sin they feel compelled to get as far from it as they can. At the same time he convinces them that Christ and his righteousness is the only place they can run to in order to escape the wrath of God and the bondage of sin. By grace, God pushes people away from sin and into the arms of the Savior. God doesn’t come to the lost in their darkness just to convince them that they are sinners on their way to hell. He focuses on their sin so that he can point them to the Lamb of God that takes away the sin of the world.

In the last lesson we noted that repentance is negative in the sense that it causes people to leave sin and their old life behind. Faith, on the other hand, is positive because it causes people to draw near to something, namely the Savior of the world. Through faith people don’t turn away from something, but they turn to someone. When they turn away from sin, Jesus Christ is there waiting to embrace them.

Believing is a function of the heart (Rom. 10:10). Faith is to the human heart what eyes are to the human body. Faith is that function of the heart that looks out and perceives something beyond oneself. With their eyes people take something separate from them, even something as far away and as huge as the moon, and bring it into their minds. In the same way, faith looks out of oneself and apprehends God and the grace that he has given to them in Jesus Christ, and brings him, with his indescribable gift, into their hearts. By faith people “behold the Lamb of God that takes away the sins of the world” (John 1:29).

Saving faith can be defined as entrusting oneself to God through Jesus Christ. It is more than merely believing a historical fact. It is trusting the character and promises of God to such a degree that a person hopes in, and submits to, Jesus Christ as their Savior from the wrath of God and the bondage of sin. Saving faith doesn’t merely believe that “Jesus died for the world,” but that “he died for me.”  Saving faith causes one to be devoted to Jesus Christ because through it they are convinced that he loved them and gave his life for them. Saving faith doesn’t merely cause us to see Jesus, it causes us to follow him.

Beware, brethren, lest there be in any of you an evil heart of unbelief in departing from the living God; but exhort one another daily, while it is called “Today,” lest any of you be hardened through the deceitfulness of sin. For we have become partakers of Christ if we hold the beginning of our confidence steadfast to the end

As this passage shows, sin hardens hearts and pushes out faith. For this reason repentance is a natural condition for faith. Since faith focuses the heart’s attention on Christ and his righteousness, a heart focused on sin can never be filled with faith. People cannot be enamored by Christ and his righteousness while they are still infatuated by sin and its lusts. Repentance casts sin off the throne of a person’s heart and makes room for Christ to take his rightful place. Repentance opens the door for faith.

Faith Is Not Automatic

Like repentance, faith is a choice. God doesn’t only command people to repent of their sins but also to place their trust in Jesus Christ. Conviction of sin is meant to lead people to repentance, but we saw in the last lesson that this is not always the outcome. In the same way, repentance prepares the heart for saving faith, but it doesn’t ensure that people will choose to place their trust in Christ. They are still responsible to “believe on the Lord Jesus Christ” (Acts 16:31).

By convincing people of their sin and Christ’s righteousness God makes it possible for people to do the “work he requires” and “believe on the One Whom He has sent” (John 6:28-29). But many, in fact most, people resist His grace and refuse to trust in the Savior.

Sometimes they don’t believe because they are still not fully convinced of their depravity. They realize that they have sinned and that the wrath of God abides on them, but they still claim that they can help God fix the problem. They insist that since they were the ones who made the mess, it is only right that they clean it up. They determine to reform their lives and so make themselves acceptable to God. They would never dream of “taking advantage” of God’s mercy, so instead they set out to “earn” their place in his family. In this way, they effectively cut themselves off from the mercy of God that is only found in Christ.

Others don’t fail at this point. They are completely convinced that not only are they going to hell, but that is the only thing they are fit for. They would never imagine that they could earn God’s mercy. In fact, they are so convinced of their depravity that they have lost all hope of ever receiving mercy. In despair they refuse to trust in the sacrifice of Christ. They are well aware of how great their sin is, but they focus on it so much that they refuse to see that Jesus is an even greater Savior.

This despair might come from a soul filled with morbid self-pity that feels strangely self-satisfied with its resolve to take what is coming to it. Or this despair might have been forced upon the individual by false teaching about divine predestination. The person might be ensnared by the idea that God only desires to save a few individuals and is delighted to use the rest of humanity as an object lesson of his powerful wrath. A person under the deep conviction of their depravity finds it difficult to imagine that they would be one of God’s chosen people. If Jesus died for all and called all to repentance they might dare to hope, but the doctrine that says he only died for a few select individuals and leaves the rest for the flames of hell gives the honest heart no room to hope. Despair will cause them to perish unless God intervenes through the testimony of his Spirit and his people.

As co-laborers with God we must know the lies that hinder people from coming to saving faith. And we must apply this knowledge in leading those who are under God’s conviction into the peace that comes through faith. Through our negligence and/or ignorance we can cause people’s new birth to be aborted. God causes them to come to new life, but we are called to be skilled midwives that bring them safely into the Promised Land.

We must reason with those that imagine they can earn their place in God’s kingdom through repentance that it is only by the generosity of God that any can be reconciled to him. We must tell them plainly and sharply and unless they come as a beggar to the “narrow gate that leads to life,” they will never get their foot through the door.

To those that are overwhelmed in despair we must plead with them to take their eyes off themselves and place them solely on the “Lamb of God that takes away the sin of the world.” We must remind them of Abraham “who, contrary to hope, in hope believed,” and “not being weak in faith, he did not consider his own body, already dead,” but instead, “was strengthened in faith, giving glory to God, and being fully convinced that what He had promised He was also able to perform” (Rom. 4:17-22). We must tell them that they too must look away from their own depravity to the faithful God who so love the world that “whosoever” should believe on his Son would have eternal life. We must tell them to look to the honest Son of God who said, “Whoever comes to me I will never cast out” (John 6:37).